This month’s 60x pro-staff spotlight is on Calvin Smock.

Inspired by the beloved outlaw Robin Hood, Calvin has been shooting traditional-style archery since he was a young boy. And the skill he’s developed since then is plain to see in his list of accomplishments. His impressive resume includes:

When Calvin isn’t participating in tournaments, he and his wife Janet are co-owners of CD Archery, along with Dewayne and Sue Ellen Martin. They use their love of the sport to design innovative barebow risers for everyone from the bowhunting enthusiast to the serious tournament archer.

All that said, it’s safe to say Calvin lives, breathes, eats, and sleeps archery. Here’s what he had to say when we sat down with him:

How did you get involved in archery?

How long have you been shooting?

Since I was 8 years old.

Sounds like a love-hate relationship with the elk target. What’s up with that?

That target is as big as a house, and it always looks closer than it is. I’ve watched many people shoot low, or even miss it. I always give it a few yards.

I lost my passport in Paris, France. Don’t do that!

Best place to eat while traveling?

Waffle House. We don’t have any locally.

Who has the best nickname in archery?

Larry Morgan – Milk. He used to be a milkman. But no one really knew that, until now.

Favorite archery moment of all time?

Standing on the podium in France and receiving a gold medal.

Favorite sport other than archery?

Most annoying thing about you?

I talk too much!

Last person who made you nervous?

How many tattoos do you have?

Yes, I need to wear my lucky clothes on the first day of deer season.

Words to live by?

Be fair and treat everyone as you would want to be treated.

Meeting people from so many different places.

Advice for someone just getting started in archery?

If you’re young, JOAD programs. If you’re old, come to a shoot and ask to shoot with me! 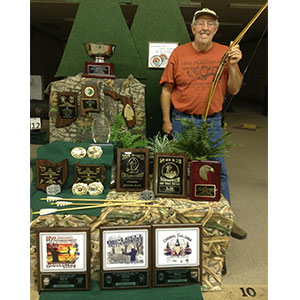