Archery looks different to all of us - it’s all about perspective. Your sight picture may be a 5 pin fixed sight, a single pin slider, or maybe even a bare shelf and riser with an arrow resting on a patch of felt. For many competing in target archery, their sights may even be fit with a lens.

That brings to mind the question: “Why not hunt with one?” This is a question I asked myself in the summer of 2021 as I began preparing for the upcoming deer season, and much to my surprise, that question brought about tons more, and I began to break down how it could help, hurt, or otherwise affect those who choose to see the hunting woods through a different, less traditional point of view.

The Pros Of Hunting With an Archery Lens

One of the first things that came to mind when considering adding a lens to my sight (I shoot a 2-pin slider I might add), was the age-old saying “aim small, miss small.” As a new hunter, largely self-taught and on public land, I’ll be the first to admit that when my pin settled on a deer for the first time at just 20 yards, it seemed as though the pins on my sight swallowed up the vitals entirely. That brought on target panic, and the number of shots I punched and just hoped for the best grew too large to count. Fast forward to hunting with a lens (I mainly hunt with a 2-4x lens), and my float rarely if ever leaves the “Vital V.” So if you feel that the pins you shoot are too big for the game you chase, and you struggle with a consistent, confident float over the vitals, a lens may be worth trying out.

Assuming you have a reasonably stable pin float, oftentimes the next thing that hinders a hunter’s effective range is the amount of space the pin takes up on their target. While a .19 fiber might only take up a 2 or 3 inch area on a target at 20 yards, stretching out your shots to 40-50 yards can get quite tricky when your pin covers the entirety of what you’re aiming at. This brings us back to the first benefit of using a lens, in that it allows you to aim smaller (i.e. your pin takes up less space on the target). Doing so can allow you to stretch shots out to 80+ yards while maintaining a reasonably sized pin on the target. Opening the door to effectively practice at significantly longer distances can be used to further steady the hand of just about any bowhunter, and make those once daunting 40 yard shots a piece of cake.

Spotting Small Obstructions Covering the Vitals of Your Game

How many times have you seen a bowhunting video, or been in a situation where that target buck comes out, provides the perfect shot, and the release is flawless – only to have the arrow deflect off a branch that wasn't seen in front of the deer’s vitals? This can cause marginal hits on game and lead to long nights of tracking, or result in a miss altogether. Seeing the vitals through a lens can provide a much closer view of your intended target, and give a crystal clear picture of anything that may be obstructing the path of your arrow. 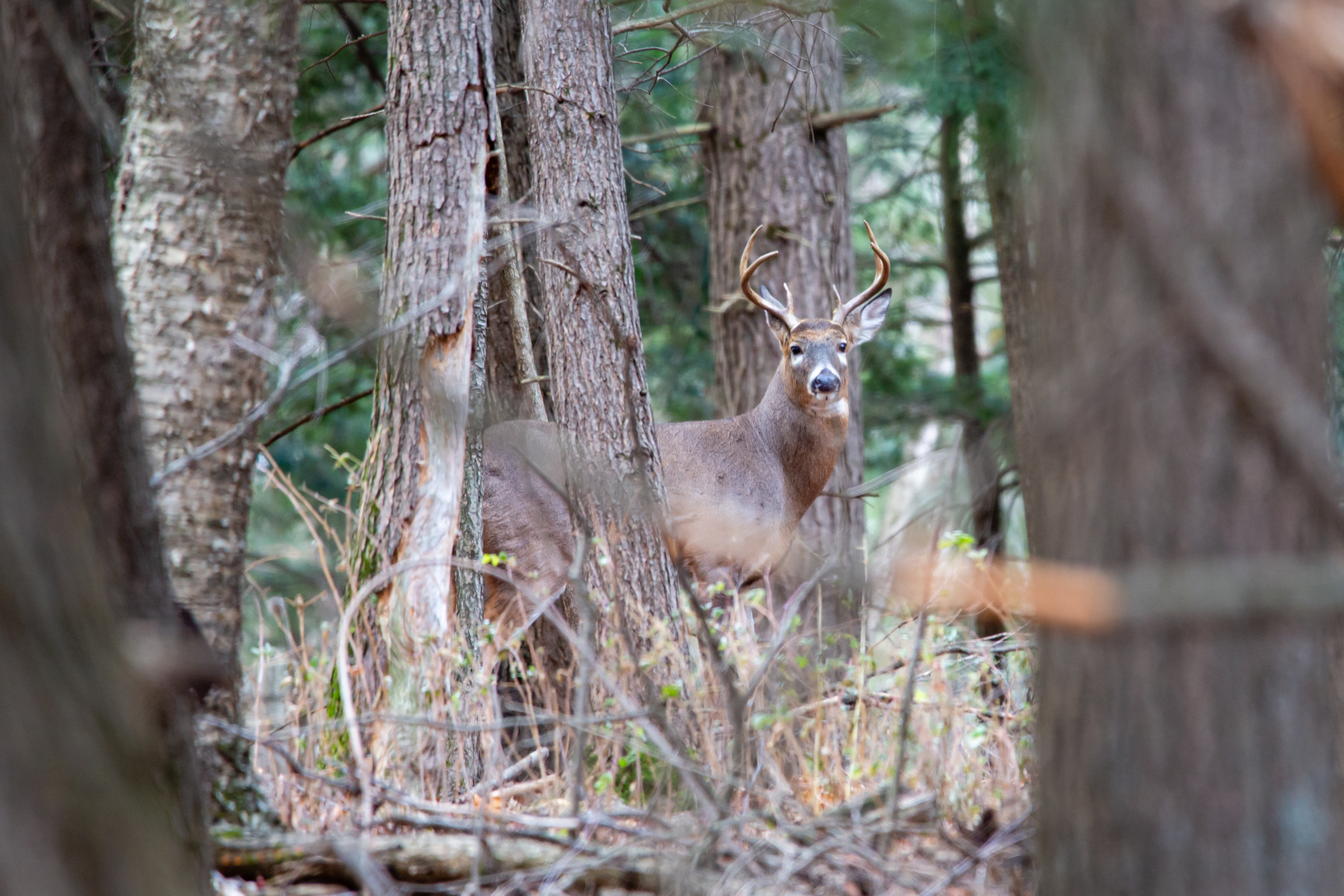 The Cons Of Hunting With an Archery Lens

Difficult to Float the Pin on Target as Magnification Increases

Not everyone benefits from seeing their target up close. Much like shooting a scoped rifle, any and all movements made while looking through a lens are significantly magnified. This, coupled with target panic and/or a breakdown of form as an archer holds their bow at full draw for extended periods of time (quite common while waiting for the right shot to present itself), could actually make an archer’s shots worse, as it can feel like their float is more erratic than before. In addition, consideration must be given to ensure you are aiming at the part of the animal you are intending to shoot, since some lenses have enough magnification that your sight picture through the scope may only show a part of the vitals (this seems like a common sense thing, but look at how many target archers mistake another archers’ target for their own). With these things in mind, you should consider where you are in your own personal archery journey and decide whether adding a lens to your hunting rig will help, or hurt your proficiency out in the hunting woods.

Your Lens Can Get Scratched/Fogged Up/Rained on In the Woods, Obstructing Your View

Let’s face it, the weather isn’t always moderate temperature, bluebird skies when we are out in the hunting woods. In fact, most prime-time hunting takes place in and around cold fronts, rain, and snow. In addition, getting close to big game oftentimes puts us in thickets and other undesirable conditions that can wreak havoc on just about any lens no matter the quality. Scratching lenses on branches when walking to your stand can cause light to reflect off them in a way that makes viewing your target more difficult. Rain and dust can also distort and obstruct your view when hunting with a lens, and adding a moving target to the mix can make hunting with a lens simply too much of a hassle for some archers.

Cost to Entry is Expensive

While archery technology has become far more advanced over the years, there are still a large number of very popular sights that won’t accept an archery lens. If you are one of the people who use one and want to try a lens on your hunting rig, odds are you will have to purchase a scope that accepts a lens (or a new sight altogether), and this can easily exceed $200 USD. For many, this isn’t worth the money, especially since there’s no guarantee they will like using a lens, and would without a doubt lose money on resale.

Considerations When Hunting With a Lens

How Do I Combat The Elements When Hunting With a Lens?

You may have an increased risk of fogging your lens based on where you hunt. That said, many lenses today are treated with anti fog, anti scratch coating that can mitigate this. These are, however, less budget friendly options, but worth noting that they’re available. You can also treat your lenses with a form of hydrophobic cleaner, that beads and repels rain from the lens. While most lenses have anti-scratch coating, the best method I’ve come up with for keeping your lens scratch-free is to use a cloth scope cover until you are in the stand.

Pro Tip: If hunting in more of a spot and stalk environment, a spring loaded scope cover such as a Butler Creek Flip Cover can protect your lens from the front, while offering the ability to quickly and quietly make the lens available for a shot.

What Magnification Should You Use?

This consideration, much like the others, largely depends on where you plan to hunt, what you plan to hunt, and how far you expect your shots to be. As discussed before, if the magnification on your lens is too high, you may have trouble figuring out what you’re aiming at (hind vs front quarter, for example) and risk making a poor shot. If your magnification is too low, you don’t really risk much, but could stand to benefit more from optimizing the magnification you hunt with. Do you hunt out west where shots routinely reach 50-60 yards? If so maybe a 4-6x lens would be optimal. Or, do you hunt in a thicket where the longest shot you have is 30 yards? Here, it might make sense just to use a 2 or 3x lens.

What Are The Regulations Where You Plan to Hunt?

Depending on where you plan to hunt, the option to hunt with a lens may not even be allowed. Take Colorado for example. In their laws for “Handheld Bows” it states that “Equipment using Scopes, electronic or battery-powered devices cannot be incorporated into or attached to the bow.” So in considering whether or not you should try to hunt with a lens, it may be best to check the laws surrounding its usage in the areas you plan to hunt.

Archery is something that’s ever-changing. It’s always evolving in one way or another, and lenses are just one step in an endless march of innovation. So regardless of whether or not you choose to hunt with them, at the end of the day it’s just another thing to make our sport a little different.

Robert Carr is an avid outdoorsman and public land hunter who loves a challenge. He has shot a bow since he was 5 years old, and shot compounds instinctively with fingers until he was 16. Be it a 3D rig, trad bow, or crossbow, he loves it all. His greatest aspiration is to become as good a mentor in the sport of archery as those who taught him. In addition, he proudly represents 60X Custom Strings as a Staff Shooter.