One accessory found on pretty much every compound bow these days is a D-loop. The D-loop has 2 jobs. The first job is to give archers a place to hook their release to draw the bow. The second job is to serve as a nocking point - to hold the nock of the arrow and keep it from sliding up and down the string during the shot. Before D-loops, nocking points were either brass nock sets crimped onto the string, or a "nock tie" made up of several overlapping wraps of serving material tied on top of the center serving.

The first configuration is what I consider a standard D-loop. This is the most common way to attach a D-loop. It pulls from straight behind the arrow and puts no force up or down onto the arrow shaft. I would say 95% of the time this configuration works excellent and promotes great accuracy. The downside to this configuration is the top and bottom of the loop can get too close together which created "nock pinch." Nock pinch does exactly what it sounds like, it pinches the nock and can create a scenario where your arrow lifts up off of the rest, especially when shooting at downward angles, like out of a tree stand. The longer the draw length is on a bow and the shorter it is axle to axle, the more susceptible this D-loop configuration is to creating nock pinch. 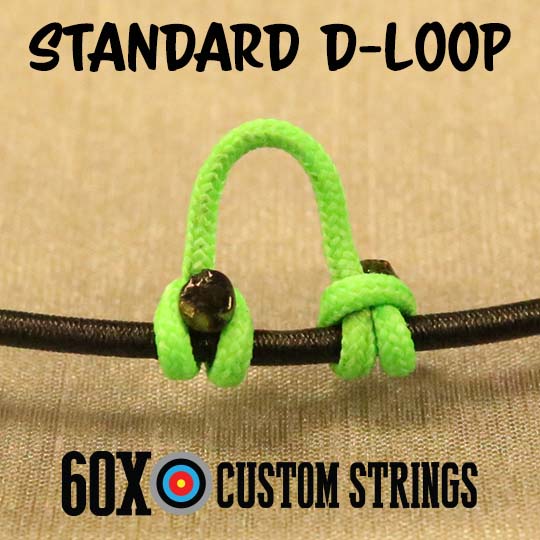 There are a couple companies that make metal versions of this D-loop. Instead of loop material being tied on, they clamp onto the string. I'm not a fan of metal loops and would try to talk anyone out of them, but to each their own.

Up next is the same as the standard D-loop above, except it has a nock tie inside the bottom loop knot. This configuration gives you the advantages of the standard D-loop, but also creates down force on the arrow. That down force will keep the arrow shaft pushed down onto the rest even at steep downhill angles. I've had this configuration work almost every time, however, there have been a few cases where the bow didn't tune the way I wanted it with the added down force on the arrow shaft. 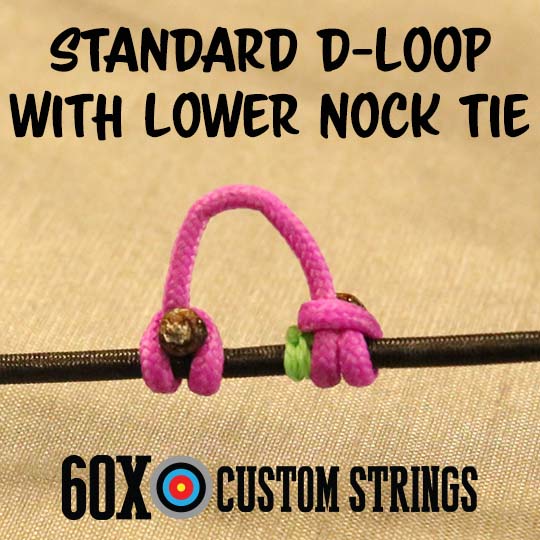 This brings us to the next configuration, which is a standard D-loop with nock ties above and below the arrow, but still inside of the loop knots. With this setup, the nock ties keep the loop from creating nock pinch, even at steep angles. So, just like the standard D-loop, you're pulling from straight behind the arrow with no added force being applied up or down on the arrow shaft. Again, some bow setups like a little down pressure on the arrow and some don't. 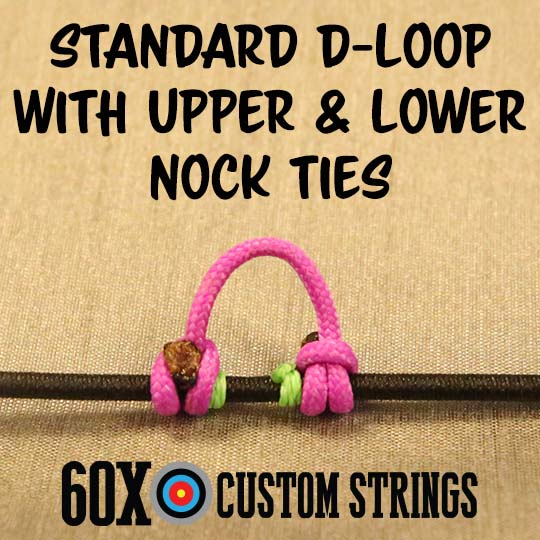 The last style of D-loop is called a torqueless D-loop. Instead of loop material, like all the other configurations I've mentioned, these are made from bowstring material. Serving is then applied to the middle where the release will make contact. This style doesn't get tied onto the string, instead it has a loop and gets cinched through itself. It's not something I would recommend for a hunting setup, so I won't go into detail here. They are softer which makes them harder to acquire quickly, especially if you're not looking down at it.

Unfortunately, there's no manual that can tell you what configuration of D-loop will work best with your shooting style and bow setup. An educated guess, along with some trial and error, will eventually lead you to the most forgiving setup possible. Hopefully this insight into D-loops will help someone get that much closer to their archery goals.

This is the first in a series about D-loops for compound bows. The next blog post will focus on D-loop placement.