There are three main types of bow string forms that have been used to fit bows. The three types are described as simple, reverse-twisted, or looped. All modern bow strings- and all of the strings sold by 60X- are looped bow strings. This article is meant to describe all string forms. If you have questions about strings for your bow, please  contact 60X custom strings.

Simple bow strings can be made of any type of fiber material. These type of strings are created by twisting fibers into a single long piece of cord. This is a very primitive type of string but it is still used in many parts of the world where custom string companies like 60x are not accessible. These strings are often only good for a few shots from a bow and don’t perform nearly as well as modern types of strings. 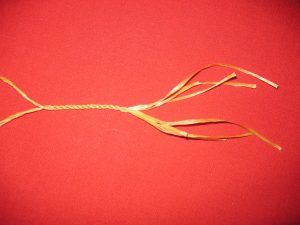 Examples of reverse-twisted strings are the Japanese bowstring and the traditional Flemish string. This type of string was originally developed in Europe and North America and is still used for many modern applications. Reverse-twisted strings are made by twisting two bundles of strings in opposing directions then twisting the entire group of strings in the same direction. These strings are an upgrade from simple strings as they are much stronger for their weight and can be drawn to a higher tension. They differ from looped strings in that the body of the string is wrapped around the nocks at the end of the bow. This is an advantage since the ends of the bow is the point of direct contact and usually sees the greatest amount of wear. For this reason, reverse-twisted strings generally last for many more shots that traditional simple strings. 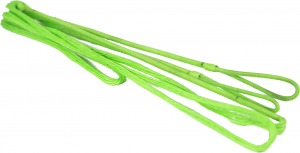 Looped strings are the type of string that all modern compound bows use. That are made of one or more loop of material. The strings made at 60X are actually one single continuous loop of material with additional material such as serving added in the areas that the strings come in contact with the bow or arrow. Looped strings are superior to all other string types. They have a higher tensile strength than all other string types and last much longer when used correctly. It is important to take care of your looped bow strings in order to get the maximum lifetime out of them. This includes regularly inspecting and waxing your bowstrings. 60X strings are pre-stretched and custom made to the specifications of your bow.